Japan kicked my butt. Now, I will admit that Japan wasn’t exactly on my “Top 10 List” of places I really want to adventure before this work trip. However, I am, of course, so happy that I got the opportunity to work and layover there. This FA life is taking me to places I never could picture myself in. So why exactly did Japan kick my butt? Well, with such a good layover and with such a great crew (seriously, those FAs know how to have fun), I was thrown headfirst into the bustling city where everything was foreign to me. I will also admit, this was probably the first truly out-of-my-comfort-zone location. Normally when I travel I can understand something- something, at least: there may be translated signs, people can speak English a little, or I understand (for the most part) what the language is getting at. Japan? Not even a little. I was foreign to everything. Driving on the opposite side, little to no English menus (also with no photos), YEN- wait, what are these coins with the circle in the middle?! Yeah, it was a little hard. I didn’t actually even attempt to learn the subway system like I usually try to. I just let Thomas and Josh figure it out (thanks, buddies).

I saw my yen quickly disappear… and yet, I’m still not actually sure where it went. Train tickets and sushi, I guess. After learning the Yen and Euro, I am glad that American currency does not use $1 and higher coins. It gets spent way too easily with the mentality, “Oh they’re just coins anyway!”. Yeah, no, that’s 5 bucks you’re spending right there. Whoops. One of the biggest problems I have learned with the FA life is money. We are in an incredible, foreign to us destination where everything looks worthy of purchase. Where we can say, “Oh, I got it in Tokyo” (guilty of this) or whatever awesome destination work takes us to. The problem is, we have to survive, too. We need to eat. And after airplane food, sometimes all you want is a really great, past-full meal… and sometimes that costs a bit. Oh, and don’t forget you aren’t getting paid for a couple more weeks so be careful! But anyway, this isn’t about those woes. Point is, traveling is dangerous. You all know that. This isn’t backpacking where you insist on living on a budget. This is your life now and you want to splurge once and awhile.

One day in Tokyo, Josh, Thomas, Nathan and I were walking along the city when we suddenly saw two sliding doors open to a loud casino. Naturally interested in a Japanese gambling area, we walked in and observed the locals at work. Placing coins, pulling levers, placing more coins- and again, and again. We all separated and observed on our own. When I return to look for the boys what do I find besides Thomas already seated at a machine putting in 1000 yen (~$9). He begins playing. Nothing. Again, nothing. A worker stops by and assists us. He points to buttons and tells Thomas to pull the lever. Suddenly grapes grapes grapes! Oh, it’s just luck now! Then again. Then again. And again. “Bitch, better have my money! Pay me what you owe me!!” We’ re all in amazement. Thomas is singing and throwing the coins the machine is spitting out into a basket on my lap. Excited, he makes vows, “I’m going to take you and you and you to the rave tonight with dinner!” We’re all pretty darn excited now. Even the lady at the desk is cheering him on- thumbs up, clapping, smiling- everything.

Suddenly, we (he) begins to lose. And again. Okay, time to get out. He does. We all adventure to the reception desk to trade in his winnings for Yen. The lady looks at us weirdly and points to the items around her. “Can I get it in Yen, please?” Nothing. There’s a language block in full effect. She smiles nervously and signals to the amount we have and to the items. We still don’t understand. She calls a coworker over. Language blocker still present. We struggle to understand each other. Finally, we see instead of Yen, we get items. Aww, man, okaaaay.” We start to pick out an assortment of Ramen packs and sodas thinking we could buy dinner there. Nope. The man looks at us even stranger than the women did. Finally we understand. We don’t have enough for all that. How much did we have? Around 19 Yen. Around ten cents. But not real cents. But tokens. This was a Japanese chuck-e-cheese. No freaking way. Here we were convinced Thomas was winning money. Nope. We each walked out with one of those masks they commonly wear when out and about. Well, at least we walked out laughing.

Anyway, the rest of Tokyo and Japan (Okinawa) was spent adventuring out, some resting, more money spending, eating, and enjoying the time with a great crew. We didn’t get to do everything we wanted (beach days and karaoke), but one day we’ll make it work. We commercialed home from Tokyo, which was about a 12 hour flight and I’ll be heading back to Japan soon but (thankfully) don’t have very long layovers. I say thankfully because Tokyo did damage to me and for now I could go for some trips with a lot more outside city adventures and a lot less train taking.

But like I said, I’m so happy I got to experience Japan with incredible friends. The FA life has introduced me to some of the most spontaneous and life-loving people. And thankfully, my next set trip will be surrounded by a few of them. Until next time, friends! 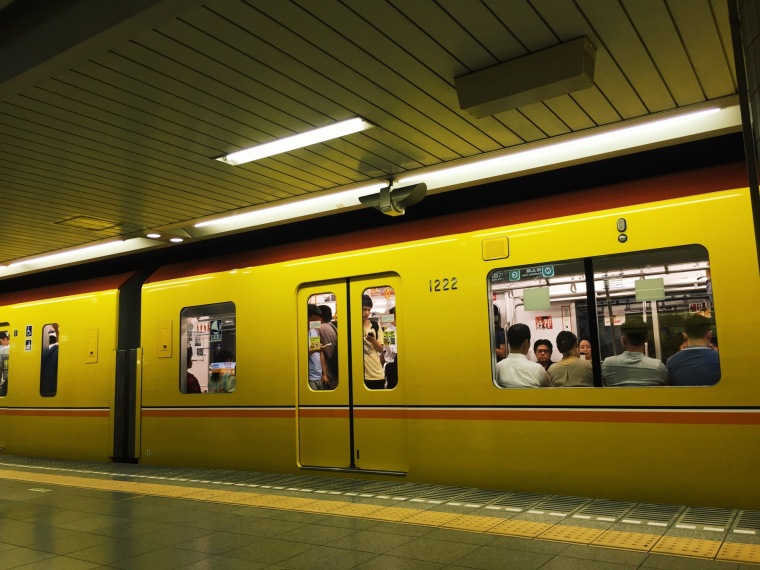 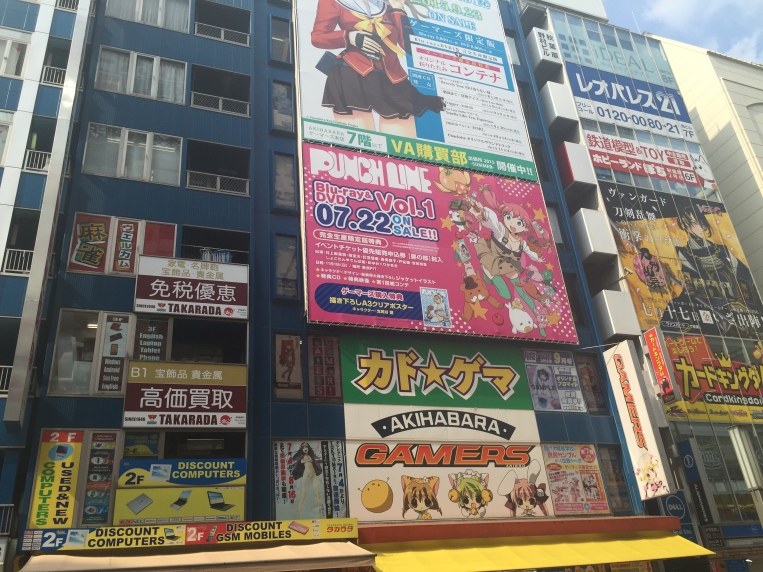 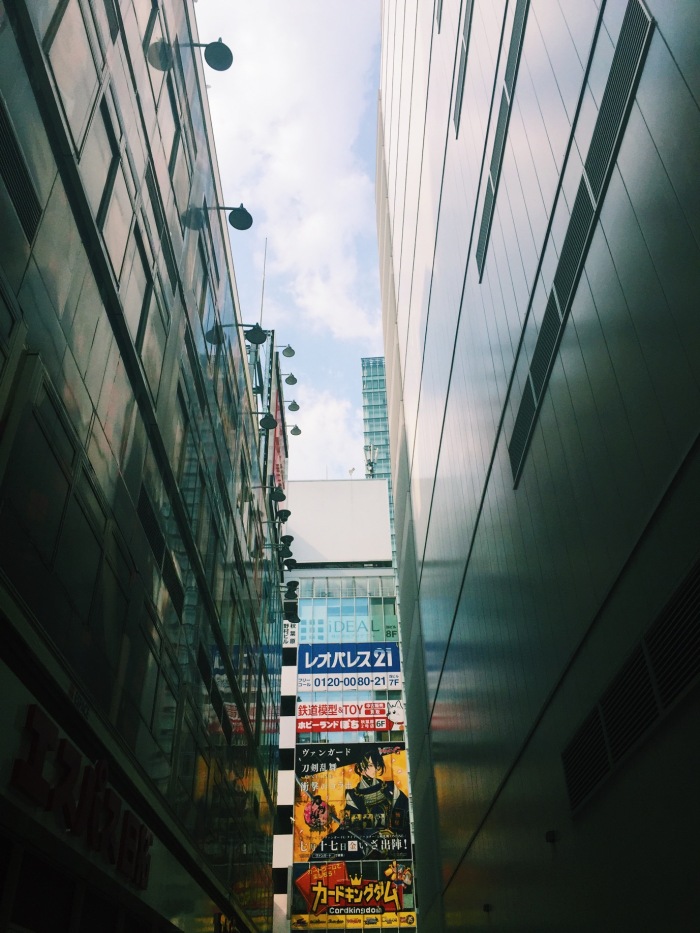 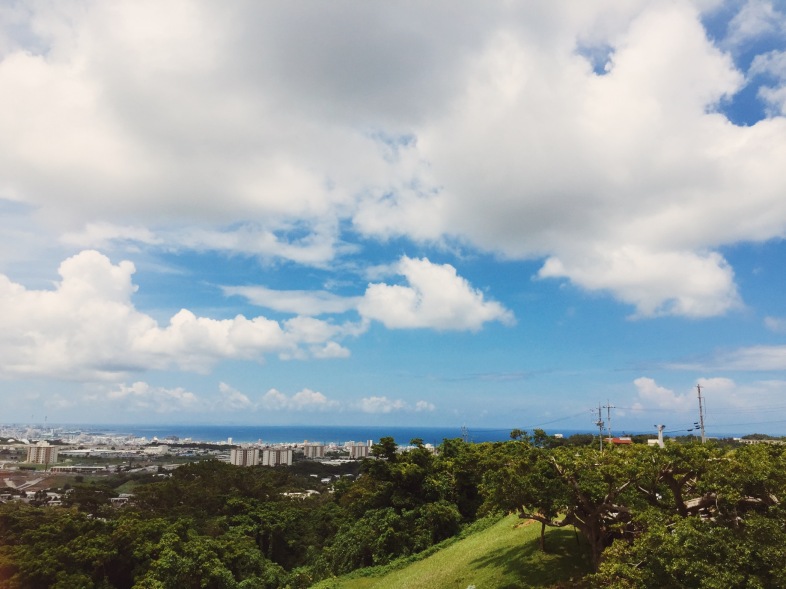 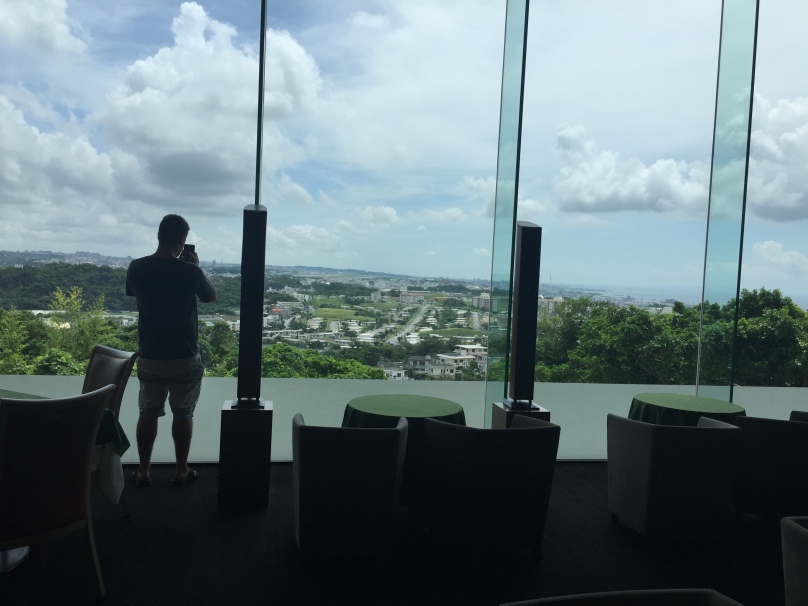 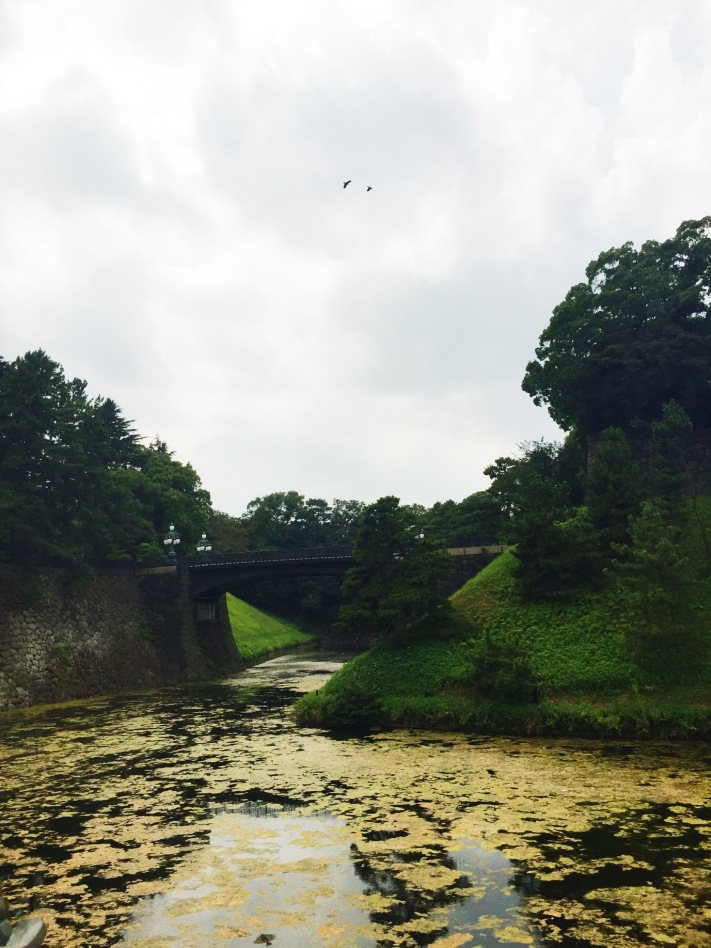 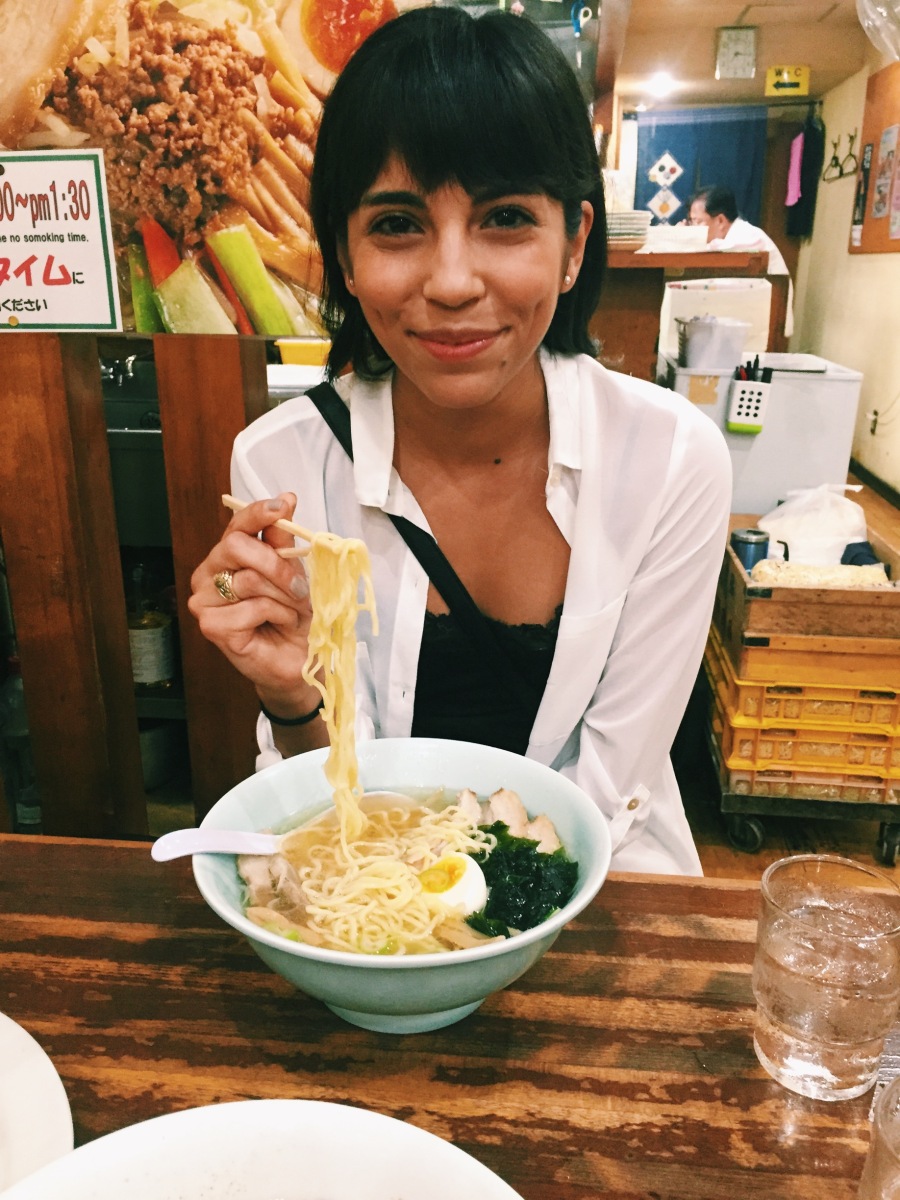 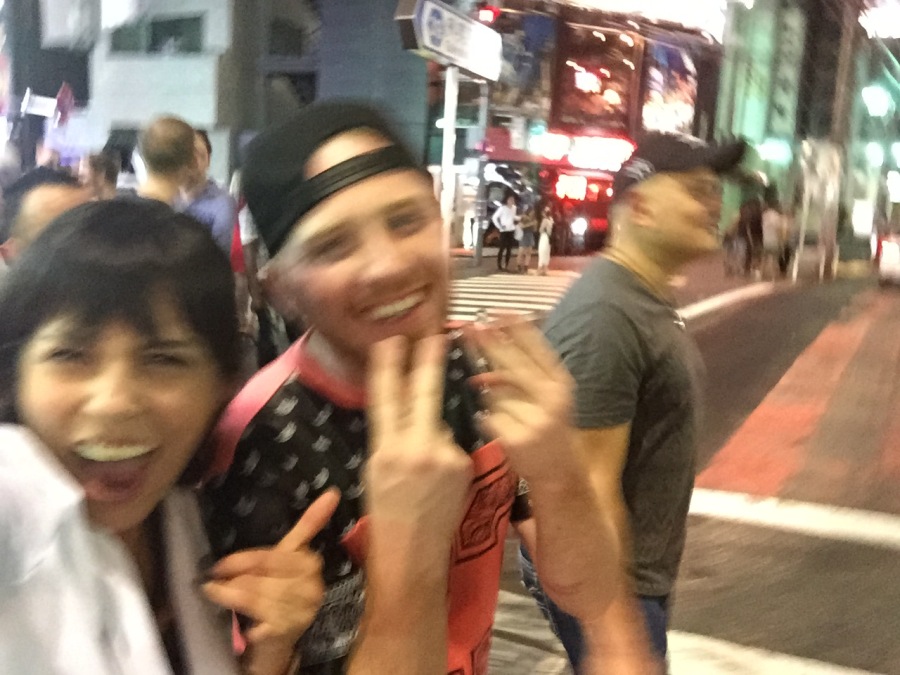 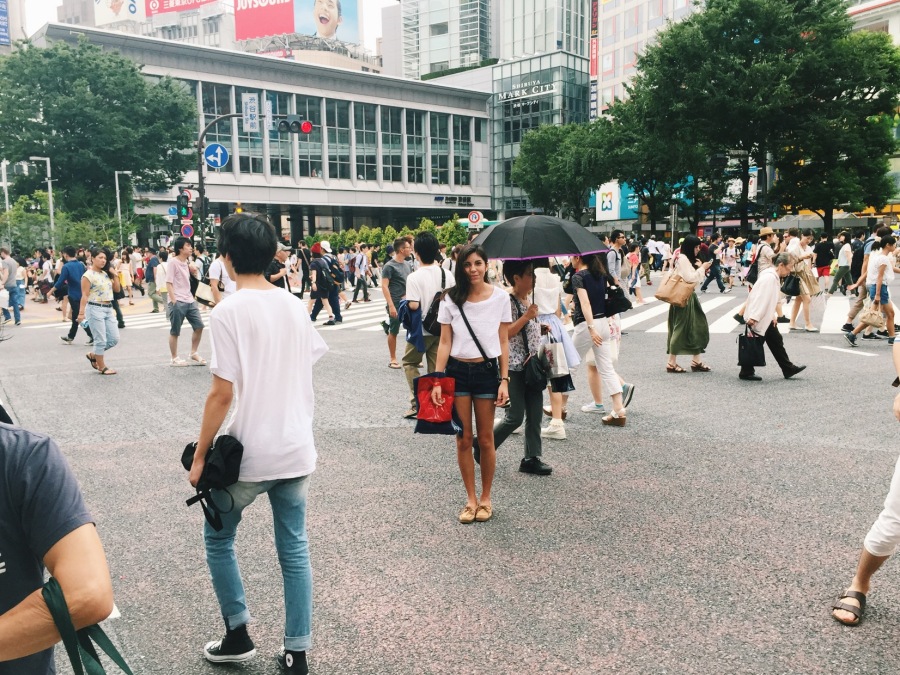 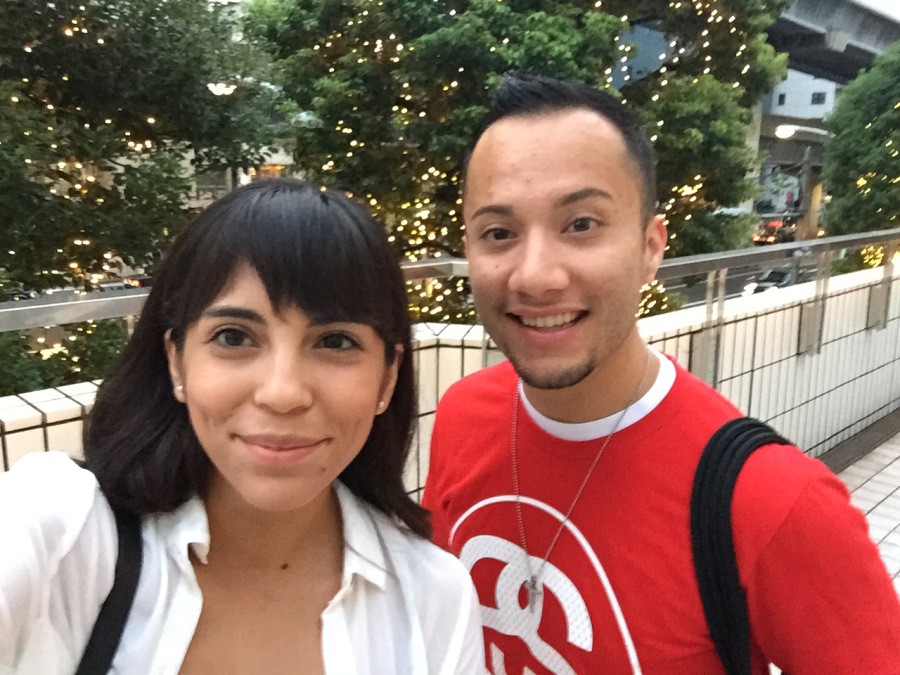 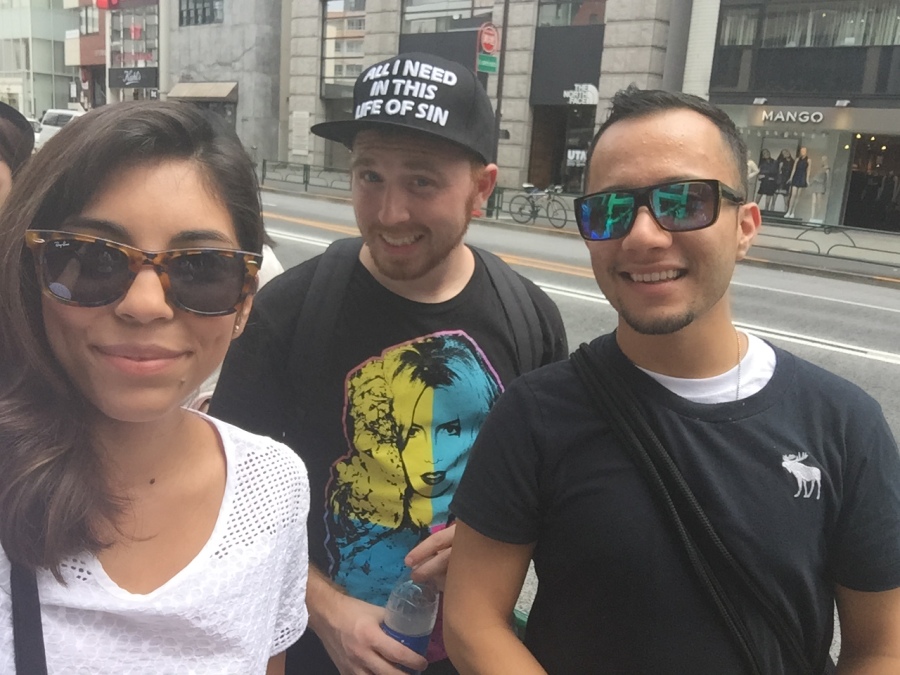 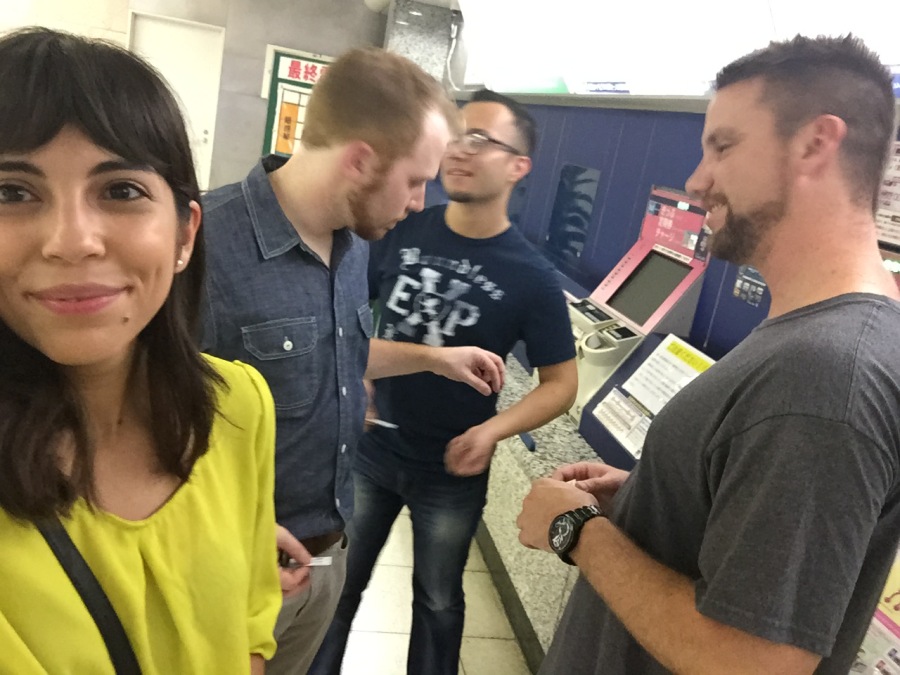 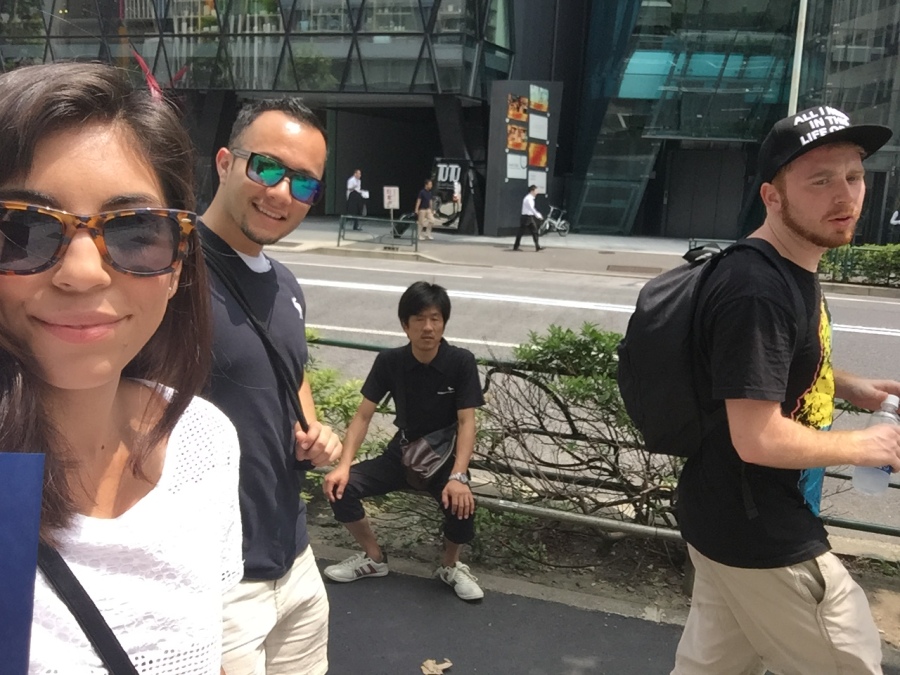 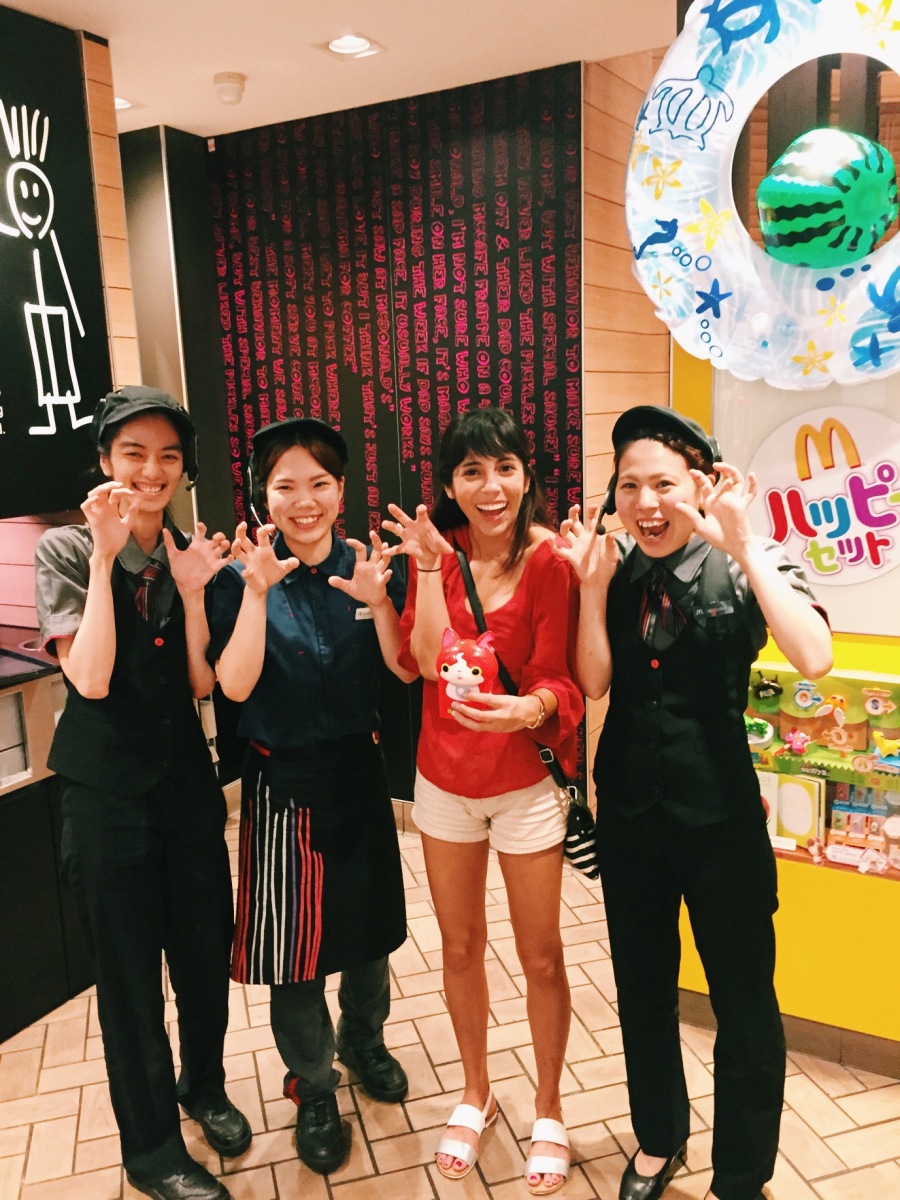 (Also that’s an awesome French fry holder from Burger King that the boys bought me one night. Isn’t it awesome?!) 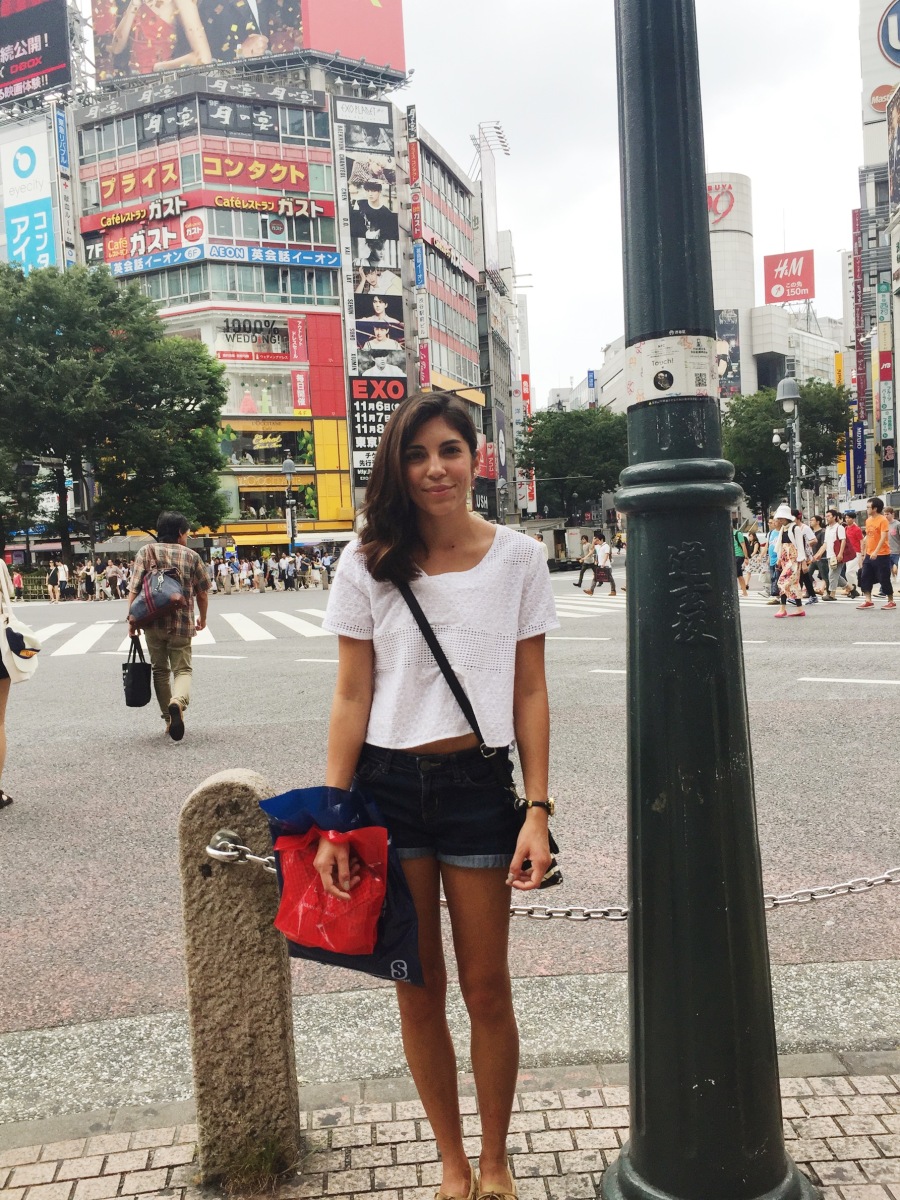 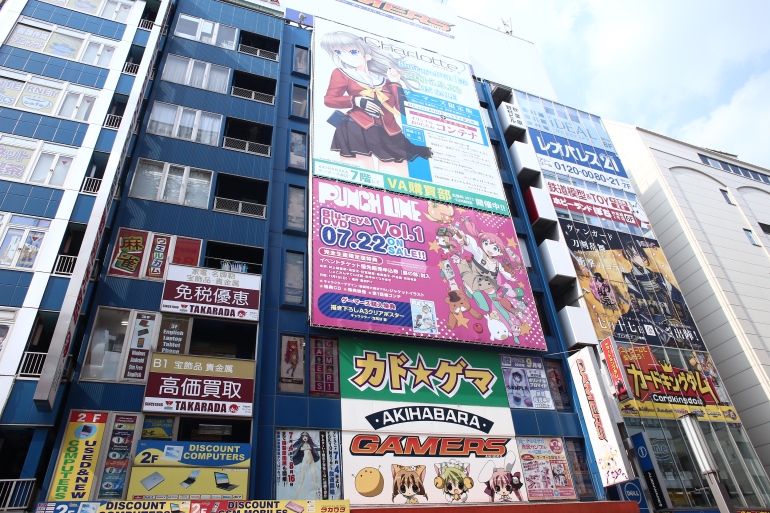 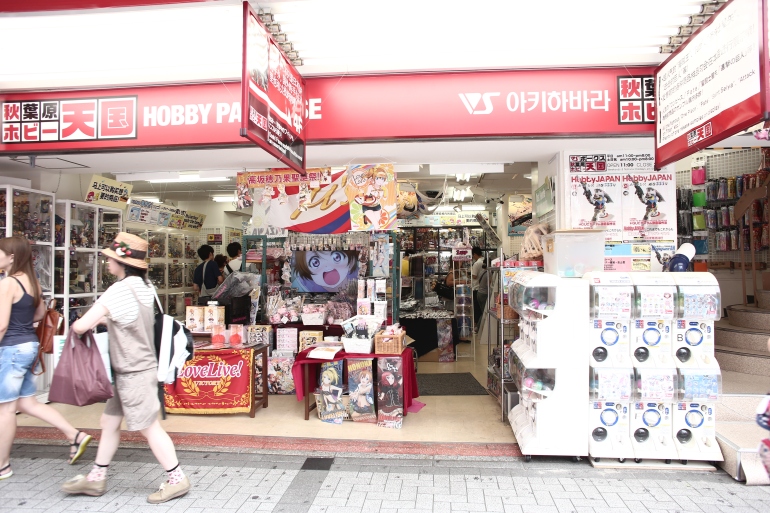 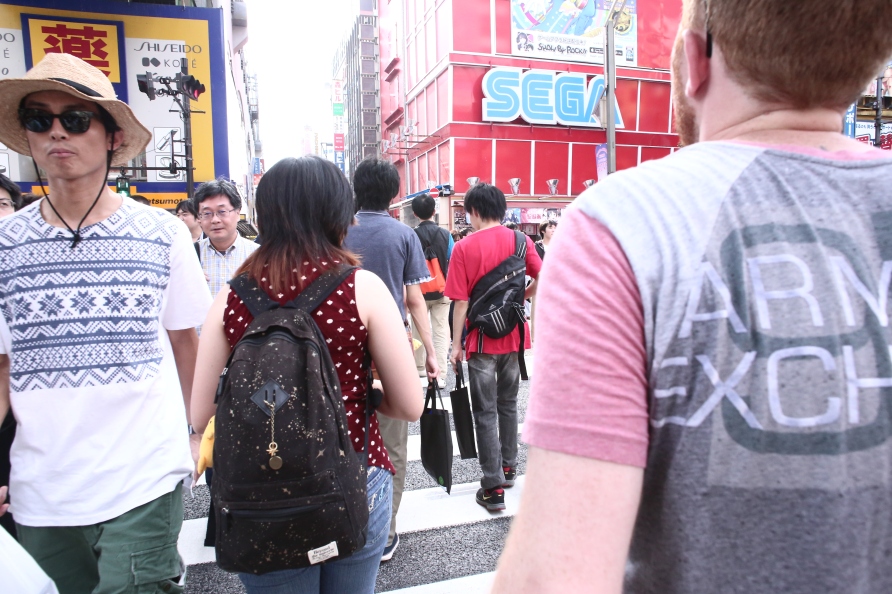